Duma is a grindcore duo from Kenya made up of Martin Khanja aka Lord Spike Heart (vocals) and Sam Karuga (production, guitar). While both have been part of the country’s metal scene for years, their upcoming self-titled debut on Nyege Nyege Tapes places their music in both the metal world and the cacophonous electronic music being churned out by labels like SVBKVLT. Joshua Minsoo Kim called Duma via WhatsApp on July 24th to discuss their new album, the Kenyan metal scene, their mentors, and more.

I’ve been telling a ton of people about the album, it’s great, thanks so much.

How did you both get into music?

Sam Karugu: For me, I used to go to a lot of shows—metal shows, classical music shows, whatever—just to listen to music. When I got into the metal scene I saw that anyone could do it, you just buy a guitar and start playing. I loved it and it was like, “Yo, this is something I wanna do.” The first instrument I got was a laptop, I had FruityLoops and started messing with it. Then I got some shitty ass guitar and started playing and then from there ended up in a lot of bands.

Martin Khanja: Yeah, for me the first show I ever played was when I was eight years old. My mom took me to a festival in a county in our town. I played that and we killed it. I got into art—drawing and painting—and then I went to school and thought about what I was gonna do. I decided to form a band and started playing vocals. I started researching how to do vocals and how to sing well, but I really liked this hardcore shit. As long as it’s hardcore, you feel like your emotions can explode.

So I was like, yeah, let’s do it. I formed my first band when I was 17 years old and then we made an album after two years or something. I never looked back—I was 17 and I’m 27 now, and I’m still going. I made a band with Sam, I made a band with friends in Kenya—we just love performing and being in the studio and making it happen.

Were there any mentors you had who really helped you grow as musicians?

Martin Khanja: Yeah there were, like one of my best friends, Sam Kiranga—but he died, yeah? He committed suicide. He showed me how to really record metal properly and we used to do it in his house. He used to be in Lust of a Dying Breed, Black Dog Angel, and Koinange Street Avengers. I met him and just started talking, and then we started recording and I really got into it because of the way he showed me how to do it. And that’s all I needed; he just advised me along the way. And then I met Leon Malu from Mortal Soul and started recording with him, and all these other artists and instrumentalists.

Crackling down a phone line from Los Angeles, Jon Hassell apologises in advance. Now 83, the multi-instrumentalist and composer – a hero of Brian Eno, Björk, Bono, Jean-Michel Basquiat and others – fell in his recording studio earlier this year, breaking his leg. The subsequent recuperation in a convalescent hospital went on for four months. He had no visitors, due to the coronavirus pandemic, “so I only had my cell phone to maintain contact with the outside world”.

It is an experience that has had after-effects. “I’m feeling a little bird-out-of-cage-like,” he says. “I’ve just got a new apartment and I’m sitting here looking at all the things I’ve brought out of storage yesterday. The place is full of stuff and I have to dig through a lot of things now. And that kind of includes my memory,” he adds, referring to our conversation. “You might hear me searching for really polished answers. But let’s give it a try.”

He really does not need to apologise. He occasionally pauses after I ask a question – “Now, let me see …” – and occasionally returns to a subject some time after I assume we are done with it, but Hassell is a fascinating interviewee, with an astonishingly rich history and umpteen intriguing theories about music.

His most recent is what he calls “pentimento”, a term he borrowed from painting that refers to images and forms that have been painted over in a finished work. He has applied the idea to music on his latest album, Seeing Through Sound, and its 2018 predecessor, Listening to Pictures: they are dense, shifting sound collages, in which, as he puts it, “layers of corrections are used to effloresce out to something”.

Researchers have developed a tiny wireless camera that is light enough to be carried by live beetles.

The team at the University of Washington in the US drew inspiration from the insects to create its low-powered camera system.

Its beetle-cam can stream up to five frames per second of low-resolution, black and white footage to a nearby smartphone.

The research was published in the Science Robotics journal.

The entire camera rig weighs just 250 milligrams, which is about a tenth of the weight of a playing card.

While the sensor itself is low resolution, capturing just 160 by 120 pixel images, it is mounted on a mechanical arm that can shift from side to side.

That allows the camera to look side to side and scan the environment, just like a beetle, and capture a higher-resolution panoramic image.

My next interview is with the wonderful Limpe Fuchs who is going to talk to us about Muusiccia. Limpe has been a recording artist since at least 1972, the year of the classic self-titled album by Anima Sound - and when I first got in touch with her I was temped to cover one of these older records. Yet the hyper-textural music of 'Muusiccia' which is from 1993 (still the earliest recording yet covered on Navel-Gazers) captivates me in a way which is so personal and so intense that I knew that was what we had to talk about instead. Before reading this interview - or perhaps while reading - I recommend you to put in your favourite headphones and allow Limpe's handmade percussion sounds to usher you in. 'Muusiccia' is no mere album, it's a sublime sound art gallery where surprises lurk around the corners and where music and sculpture seem to collide. Let's find out more!

AC: Not to lead off with anything too topical, but you had mentioned to me that 'Muusiccia' was recorded when you were living in Italy, which is a place that has been all over the news lately. And it sounds as though your surroundings were remarkably calm and serene then, living in a quiet house in the woods... So the timing of our discussion is quite interesting. Could you tell me how it is you found yourself in Italy at that time, and/or anything else about the environment this music originated from?

Limpe Fuchs: In 1976 we sold part of our house in Bavaria and bought 12 hectares of land and an old farmhouse in the Colline Metallifere of Upper Toscana. We wanted to expand our agricultural activities. In this area the wives of the workers in the Pyrit mines each owned a piece of land to grow a garden and some animals. When the mines were outgone, they sold the land to foreigners - Germans, Dutch, Swiss. The place was so lonely - no road, no water, no electricity - that we only got there with an off-road car at daytime. But step by step we built up what we needed and enjoyed the lovely wilderness. Only on holidays were we disturbed by lots of hunters driving through the woods with their small Fiat cars. 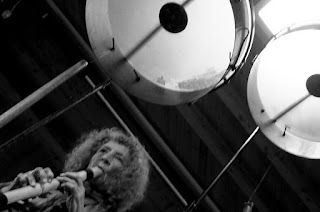 I think from this time on, my instruments were better-developed, and also my playing of them. One thing I would like to say about 'Muusiccia' is that at this time field recording was a practice I followed nearly every day. Especially when I had the opportunity to join the Squadra Malossi though the woods to record their chase of the wild pigs.

In this time - between my solo percussion work - I also did experimental theatre work, sponsored by the city of Munich, by taking parts of a poem and working out with my music, to a play. One was called 'Gesang Zur Nacht' with the expressionistic poetry of Georg Trakl, who lived from 1887 - 1914. For this "shooting track" I chose his poem about the battle of Grodek. He was involved as a sanitary assistant in the camps of the wounded soldiers. He was so scared that he suicided.

I am part of the first generation of Germans not involved in war in hundreds of years, and very engaged in peace. So I took the opportunity to work with this poem as a warning.

AC: Of course you're referring here to The Chase, the magnificent 17-minute piece at the centre of 'Muusiccia' where we can hear your recitation of Georg Trakl's poem. The theatrical component was unknown to me. I'm interested to know more about your experience on the wild pig chase with the squadron in the woods - we can also hear your field recordings of this throughout 'The Chase' and the effect is quite dramatic. Who were the Squadra Malossi and how did you come into contact with them? How did you come to accompany them on the chase? How did they react to your field-recording the event?

Limpe Fuchs: The members of the Squadra were our neighbours. They also had a house in the wilderness, but normally only stayed there on holidays - or for the chase. I did not tell them about my project. Perhaps they thought me to be a fan of the shooting - I really was not, I liked the peaceful surroundings.

But I also had trouble with the pigs, because we did not have large fields. The harvesters from the Maremma, where the flat big fields were, always came very late up the hills and in the meantime the pigs were eating the grain - also the grain from the neighbours! But I followed a different more creative strategy. From an organic farm in Germany I got two plants of a variety of wheat with kemp on the grains. I planted two rows in my garden, then 10 m2 in the field, and in three years we could harvest our grain without loss!

I was very influenced by soundscape artists. I do not separate noises and music: all of what comes to my ears is interesting and influences my thinking. Especially for this project, I worked it into the title: MUU is mooh (in German pronounced muuh!) for the song with our cow and my bowing of the pendulum string instrument. MuSIc is in the word and CaCCIA (pronounced katscha), the Italian word for chase. My compositions revolve around these terms. After the dramatic chase track, the water sound soothes-down and opens the ears for different sounds, and the end is very light with the dance track.